Here we are then – the second part of probably the most ill-advised series ever. It’s been pointed out that at a rate of ‘a bunch’ a day, it’s going to take a little over three years to complete. Well, no sense in hanging around then, eh? Let’s just hope there’s a little less east European in this batch… 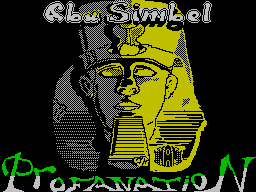 I’ve heard a lot about this game. Everything I’ve heard pointed to it being a fantastic adventure. Sadly I can’t get off the first screen. I’m controlling a purple blob with legs that jumps entirely at random. Seriously, I’m typing in the next window, and Mr Blobby’s nephew is springing up and down without any prompting at all. Still, there is a sign that Dinamic have spared a thought for the average gamer – I’ve got ten lives to play with. (Not that I can get anywhere near anything that could take one away, of course.)

So, how to score it? I’ll start with ten out of ten, and take away one point for every time the main character jumps in the next twenty seconds. Ready? Go. 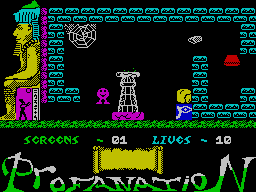 One out of ten. 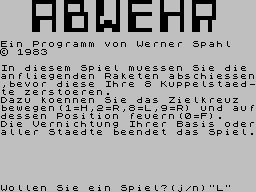 On loading I’m confronted with a wall of German text. Gah! Still, I can make out what appear to be the control keys, and make it through the question (on only my second attempt!) to start the game. 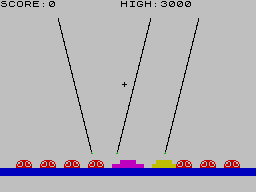 Turns out this is a Missile Command clone, written in BASIC. It’s also got some obscenely hard controls – 1 and 2 move up and down, 8 and 9 for left and right. And 0 fires. It’s incomprehensible why these are the keys. 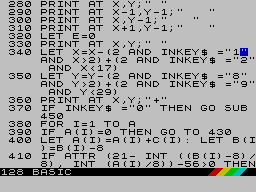 Still, it is in BASIC, so I can reset those to something more usable. On the other hand, I’ve still got about eight thousand games to get through. Schnitzel out of ten.

Opens with a heavy copyright notice with broken UDGs in 128 mode, using the system font. There’s then two word-packed screens of background story and rudimentary instructions. Then there’s some more loading, and I’m presented with this: 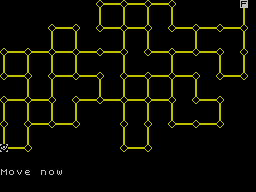 Now, graphics aren’t everything, we all know that. I’m not so shallow as to drop a game immediately on seeing something so hideous. But after messing around for a few seconds I was presented with this screen: 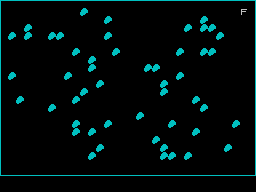 What you missed was what I presume was my character, drawn in the bottom left before all those blue things, and then deleted. I’ve tried every key on the keyboard, including the cursor keys I used to get this far. Nothing’s happening. I’m dropping this game’s score into an abyss.

Bizarrely, this game opens by asking if I have a black and white TV. Well, well. I’d been wondering what possible use RealSpec‘s greyscale mode could serve, and now I know. Intrigued, I set forth into a BASIC game that really doesn’t work on the 128s: 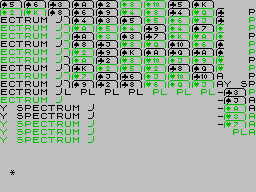 I give this one PLAY out of SPECTRUM.

This game is by Pete Cooke, one of the best programmers to ever touch a Speccy. A sequel to Tau Ceti, it gives you a range of missions using the same first-person simulator view, only bigger and faster. It’s astonishing to see such a solid world on the humble Spectrum. The sun rises and sets, lightning forks across the sky, and solid, lit enemies cruise around hunting for you. 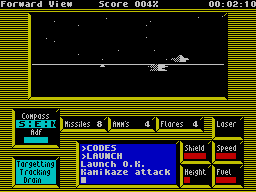 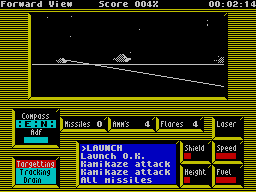 Nine out of ten, and why hasn’t this or Tau Ceti been remade yet? 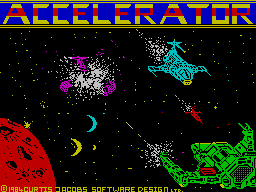 Nice title screen, I’m sure we can agree, but why does it take four pages of instructions to get the controls? At least they’re normal ones, anyway, rather than bizarre German ones. 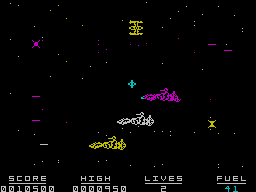 It’s a shoot-’em-up in which the enemy sprites are rather nicely drawn, while the player gets to fly a Transform-A-Snack. It’s also rather slow and jerky, speeding up again at inconvenient moments. It’s also fantastically easy – my second go was taking so long I had to kill myself so that I could get on with this review. I think this one’s a four out of ten. 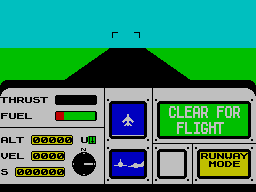 Oh. I crashed. I didn’t even get off the ground. Ah well, let’s try again and fiddle with the keys. Aha! There’s the accelerator – full throttle and… 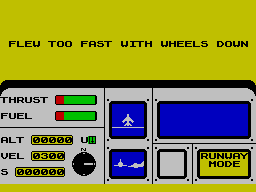 Okay. Let’s try that again. Maybe ‘U’ raises the undercarriage… 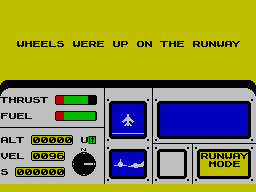 Guess so. Well, since I seem to be getting worse, I think it’s time to move on. Let’s give this one… ooh, 73 percent.

Well, no worries about taking off in this one. But for that same reason it seems a little less interesting. It’s a dogfight-only game, with the computer taking part only if there’s no second player. The graphics are frankly awful, with the planes going from dots to misshapen blobs in just a couple of frames. Three out of ten. 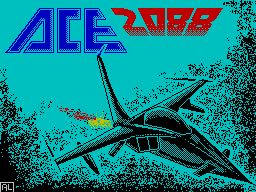 Crikey, what did I do to deserve three of these games? Sigh. Ah well, the sooner we jump into it the sooner we can jump back out. 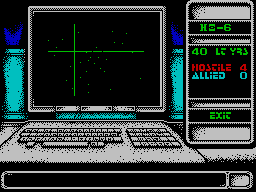 (Would you look at that keyboard? Seriously, how is anyone supposed to use that? And what’s with all the bonus keys on the number pad? Is base 16 what awaits us in 2088?)

This one’s a little bit different to the prequels. You get this fancy tactical overview thing first, before picking a system and then a planet to attack. What’s more, while you’re messing around on this tactical screen, the game continues playing, with enemy forces seizing planets left and right.

So, you’ve picked your target, armed a fighter and launched. This is what you get: 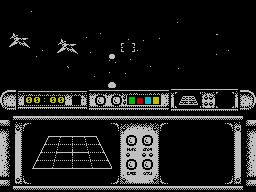 As you can see, you play from the cockpit. What you can’t see in a screenshot is that the game is fast and slick, certainly not what I expected after the rest of the crap I’ve played today. This game was ahead of its time; elements of it are echoed in Wing Commander and Starfox 2, amongst others. Eight out of ten, easy, and perhaps even nine if I hadn’t had to suffer Aces 1 and 2 to get here.

Dogfighting is quite a big part of the game, and looking at it now it’s rather weak. Enemy planes don’t get any closer, and they don’t get any further away either. They just appear on your screen at this size, and stay at this size. They don’t visibly shoot back either, but you still take damage, usually something like this:

Apart from the enemies, the graphics are quite nice. Your plane is well-drawn, and it’s also fully-featured. All those levers and things on the wing view above? They all work. (One of them is even used for switching off the engine in this ‘on fire’ sort of situation.) Overall though, nice graphics and a flashy interface can’t make up for the fact that ninety percent of the game is spent looking at clouds you can’t fly under and that all of your enemies hover around like space invaders. Five out of ten.