As I’ve been reminded, it has been a while since the last installment, but then kidnapping Jon and forcing him to write something has taken its toll on my schedule. And I was going to spend this evening finishing up the feature on last month’s Oxford meet. But, since it’s not very often that we actually get reader requests, I shall instead be singing a medley of hits from Abba… What’s that? Complete Guide to Spectrum Games? Ah. Well, I think you’ll agree that’s an easy mistake to make. Ahem. I shall instead be reviewing a medley of hits from Aftermath to Agent X 2. You’re so hot, teasing me… So you’re blue, but I can’t take a chance on a chick like you…

It’s Missile Command! Only all your bullets move at the speed of molasses, and are actually physically incapable of hitting the fast-moving missiles that are coming in. Also, when your launcher at the centre of the screen is hit, all your missiles are destroyed and you just have to hope the bases you’re supposed to be protecting aren’t targeted.

So when you get to the third wave and the very moment it starts a stupidly fast enemy missile zooms in and destroys all your missiles within (and I’m not kidding here) one whole second, you won’t be very inclined to keep playing. And when all your bases are hit, you just have to sit and wait until the computer’s done bombarding you for a ‘game over’ screen. There’s not even any decent explosions to make up for all of this. In fact, there aren’t ANY explosions! What a swizz!

And what a wonderful start to the session. Still, at least things can’t get any worse now, eh?

Expecting more of the same, but maybe with some actual explosions, I loaded up what I thought would be another crappy Missile Command knock-off. Instead, I got this: 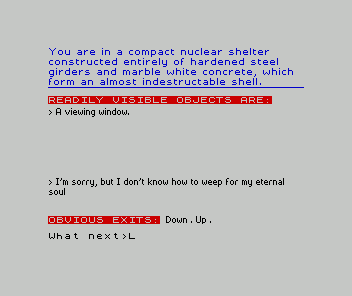 No title screen, no instructions, just dropped into (oh lordy) another text adventure. (I’m not sure if I should feel relieved or not.) It’s also a text adventure where I can’t use ‘D’ or ‘U’ for down or up. In fact, I can’t even use ‘down’ or ‘up’. I have to type out ‘GO DOWN’ or ‘GO UP’. Also, there’s a full five seconds between you pressing enter and you getting asked for another command, in which time the computer very slowly clears the screen, then draws a room description, then pauses, displays the response to your last command (even if it was just to tell you it doesn’t know what you’re talking about), and then, finally, asks ‘What next’. (Yeah, ‘what next’. Not ‘what next?‘, although I suppose punctuation might add another second or so to the response time so I should be counting myself lucky.)

It took me almost a minute to get to the second room before I realised I’d had enough.

Ah, Spain. It seems to me that the Speccy is about as Spanish as it British, what with the 128 emerging from over there with all its bells and whistles. Not to mention all the fantastic games that have come from there. Of course, I never really get to play fantastic games in this feature – somehow they all avoid me and I’m stuck with an immobile St Bernard and war by text adventure.

Things opened… strangely. Take a listen, and tell me you’re not expecting something truly awful. 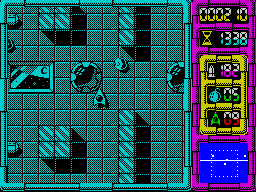 And yet, here’s the actual game. It’s Asteroids, only in a maze. The map scrolls around smooth and fast, with mono graphics to avoid colour clash. The asteroids themselves, like your ship, are sprites rather than vectors, and there are plenty of them. Brilliantly (and unexpectedly) when you hit the walls of this maze you simply bounce off rather than die a fiery death.

It’s a sharp little game that not only takes an arcade classic and expands on it, but also makes Aftermath look even worse in comparison.

Crikey. Look at that. 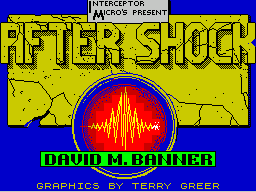 No, really, have a look.

David Banner? Where’ve we seen that name before? 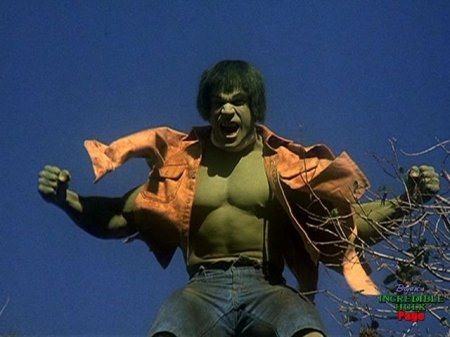 YIKES! Er… well, it might be a text adventure with horrible, unreadable text justification, but I’m not faulting it. Ten out of ten, Mr Hulk.

Ooh, another Spanish game. And from legendary developers Dinamic, too! It looks like things have changed around here, and I’ll finally be playing some decent games from now on. 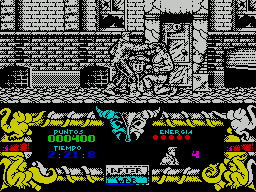 And look! It’s a proper side-scrolling beat-’em-up! I can walk along and punch people and… wait, what’s this crap falling out of the sky? It looks like it’s on fire and… oh. I’m dead. Okay, well I’ll just jump over those things next time. Start the level again, walk along, punch the dudes, see falling things, jump and… oh. I’m dead again. Okay, maybe I can just back off until they explode. Start again, walk along, punch the dudes, back off and… hm. Dead. 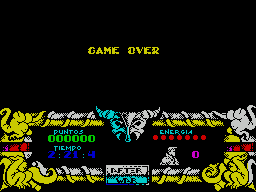 It’s a Dinamic game. Get used to seeing this screen a lot, and never getting past level one.

It’s another text adventure. Now, we all know how I feel about text adventures, don’t we? Thing is, this one’s actually quite nice. It’s got a proper parser, so it understands all the good short-cuts (like ‘x’ for ‘examine’ – eeh, magic!) and is quick to respond. It’s got a nice font, rather than using the system one and looking like a BASIC game. And it’s well-written – good, short room descriptions that tell you what you need to know without being minimalist, and descriptive without overwhelming you with irrelevant details. This, folks, is how text adventures should be.

And! If you do play this and enjoy it, why not bung some money in the direction of Zenobi and get a CD with all the Zenobi games on it, hm? (Yes, I know the snapshots are on WoS. That’s not the point, is it?) 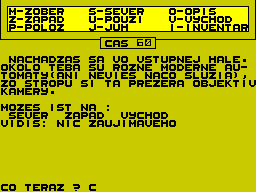 Opening with the awe-inspiring Tim Follin track from Chronos is, while cheeky, still guaranteed to put me in a good mood for dealing with your game. Unfortunately, the game itself is both text-heavy and in Czechoslovakian or something, so all that good-will is wasted. Ho hum.

There’s not a lot in a shoot-’em-up that bugs me quite like being blown up by flying into an exploding enemy. They’re dead, okay? They shouldn’t be able to hurt me any more. Sure, if this was a simulator you might have a point, but it’s an overhead shooter and I already beat that bad guy. Don’t punish me for wanting to make it look as Hollywood as possible, okay? Especially when I’m supposed to be picking up stuff that the bad guys drop when they die. And don’t then make that stuff explode if I don’t pick it up within a couple of seconds. 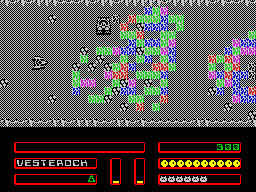 Anyway. It’s some kind of strategic shooty-trady game. You have to clear a bunch of planets, and trade the stuff you pick up from the enemies. Because it’s a flip-screener, rather than a scroller, it’s often very difficult to shoot a bad guy without flying into him. Also, being able to only fire one shot at a time makes things more difficult than they could be. There’s not a lot to recommend about the game, although it does have an interesting concept. 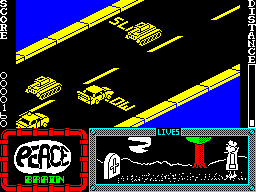 If you get through all this, you then get to take part in some sort of side-scrolling jump-’em-up, in which you could stop and punch or kick everyone who came at you, but then you will die, so it’s safer to just pick a direction and keep jumping that way until you’re inevitably run down by some sort of minecart. 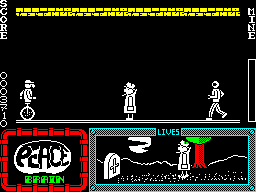 I’m rather torn on this one. On the one hand it’s got more lovely Tim Follin music, but on the other it’s not very much fun. Ah, wait – that pretty much settles it, doesn’t it? Go and download the music, but don’t bother playing the game. Hurrah! 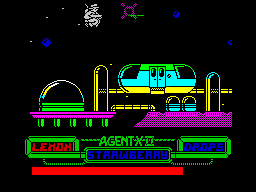 Ooh, more Tim Follin music! And a slightly more interesting game, too. This time around, you’re in space, flying a jet-pack against assorted surrealist enemies. It’s a bit like Sidewize, or to be more accurate – it’s a lot like a more colourful Chronos (a game by exactly the same people). Only not as fast, or as good. And Chronos didn’t bother with power-ups that didn’t actually do anything.

So, there we are. A few disappointments, but overall it looks like we’ve turned a corner. It’s good games from here on in! Next time, it’s… Ag Piton to Air Defence. Bugger.