Well, after that short break, normal service is being resumed. Without further ado, I bring you – Part Seven!

And hey, that’s still more of an introduction than this game gives you. Look, this is what appears as soon as the game loads… 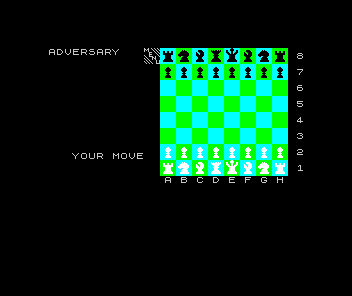 See? And at least I’m not expecting you to leave a comment before I do anything else. However, a lot like me this game does stop for long periods of time, apparently no longer interested in playing. For instance, I’m still waiting for it to take its second move. It’s been nearly five minutes now, which is about as long as I was going to play it in total. Y’know what, I’m going to claim victory against the computer here – I’ve moved two pawns and just totally psyched it out. For this poor performance, I’ll have to score it, ooh… one out of Big Blue.

And here’s another one that just drops you straight into the game. After the minor preamble of being asked for the number of players, you get to sail a reasonably pretty sea. At first it seems to be a simple maze game, but then a giant floating Zardoz wannabe comes out of nowhere spraying lightning all over the shop. 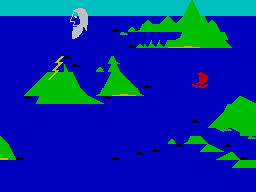 Dodge that, and eventually the juddery scrolling stops, leaving you with nowhere to go. A barely-there typhoon’ll smash up your ship, and that’s that. You don’t seem to be able to land on any of those beaches, and there doesn’t seem to be anywhere to go. Still, look at those minimalist graphics. Mm.

Bugger, it’s in Spanish. What the hell does all this mean? 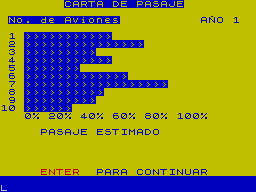 Okay, okay… let’s say that ‘aviones’ are aeroplanes. ‘Ano 1’ is year one. ‘Carta’ is either map or menu… I think this might be an airline management simulation. 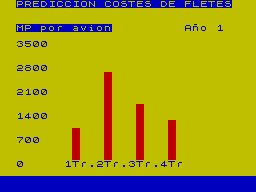 Ah, yes. Very interesting. Now to put this valuable information to use… 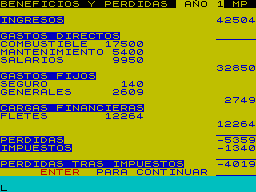 Alright, I don’t speak Spanish at all. Perdidas out of impuestos. Next! 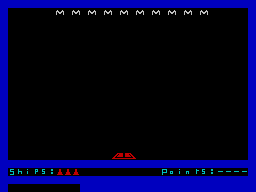 See that picture? That’s about half a second into the game. Less than half a second after that, I’m looking at (c) 1982 Amstrad. While this wonder of modern twenty-first century programming has saved me some time, it’s also got a really irritating squealy noise that it works in twice before I get to play it, so now this game owes me some points. 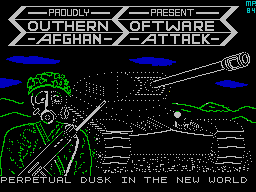 Ooh, look at that loading screen. Atmospheric, eh? What do you suppose the chances are of the game matching up? Well, it’s got twenty-three pages of introductory text before telling me to ‘press any key to load part 1’. Not a great start. 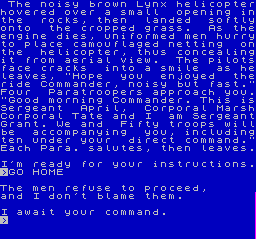 And then it’s a text adventure. A text adventure in which you cannot move in any direction from the starting location (and yes, I tried up and down too). I think I’m owed some more points.

Oh god, another text adventure! And this time it’s in German! And take a look at this… 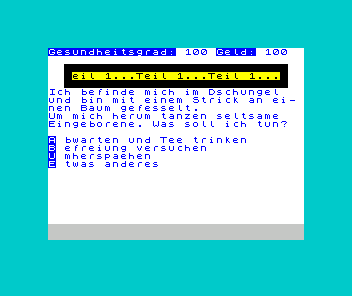 Now, obviously I don’t understand any German beyond what I remember from The Great Escape. That’s not the biggest problem here. The biggest problem is the border. You can’t see it in that screenshot, but it’s going all Jeff Minter on my monitor and given me a headache in approximately zero point zero seconds. (Click it if you really want to get a glimpse of the horror.) Not only am I now owed points, but I’m also owed some sort of physical compensation. 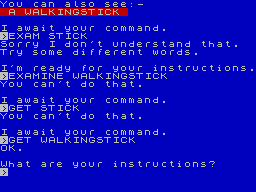 Well, it’s another text adventure, and it’s thankfully in English. Unfortunately it also has a really horrible parser, where things have to be typed in precisely as it tells you, and nothing can be examined. Two rooms in and I really can’t be bothered with such a finicky game any more.

I’ve learnt the hard way that when a game asks if you want to see instructions, you could be volunteering for twenty slow-moving screens of utter irrelevance, with the controls tacked onto the end. So when this game asked, I said, quite firmly, no. And then I was presented with this. 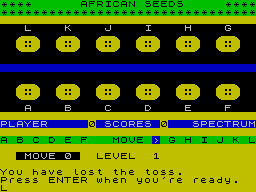 J was illegal, apparently, so I tried A. The computer then did the precise opposite from when it was playing Chess, and made about half a dozen moves, moving the board around completely. So now I’ve got this… 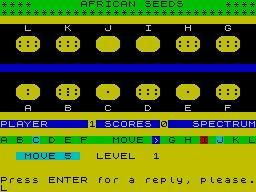 …and I have no idea what I’m supposed to be doing. None of this makes sense. I’m guessing those are seeds, but what is it that makes them African? Why is it making all these noises? Why does the computer get to make five moves for every one I make? Why does this feel like a CGC entry? Why am I still trying to play it? 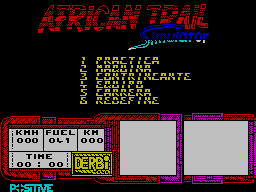 What… what’s this? Proper music? A proper menu screen? (Okay, the text is blimmin’ hard to read, but still.) Could this be… a proper game? 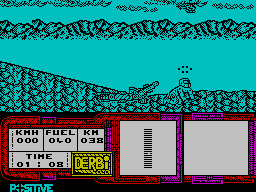 Great pip! It’s a real, live, playable machine code game! It’s a side-scrolling game, where-in you ride a motorbike as fast as you can from one end of the track to the other, going over hills and things. I’m truly awful at it, but I don’t care. It’s a proper game at last! After working my way through all that dross, I’ve finally been rewarded… This game earns a grateful ten out of ten.

So, at the end of that little lot, I’m owed twenty points and at least three bottles of something good. That was worth putting off… er, waiting for, wasn’t it, eh, Spec-chums? Next time, it’s Aftermath to Agent X!