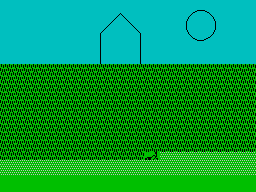 Ten out of ten. It can only be downhill from here.

Shockingly, I’ve never played this game before. I know, I know – I really should have, if only for the sake of picking up any extra feature ideas for ALS 2000. But hey – research takes a lot of time and effort that could otherwise be spent going to the shops and picking up more Space Raiders and Fanta Fruit Twist, and only one of them is guaranteed to be rewarding.

So anyway. This game is a more technical exploration of lawnmowing, with a more detailed simulation. Rather than simply pressing ‘M’ to mow, you now have to fiddle with the clutch and the throttle to get the mower going. In case you were worried about things going all spoddy, there’s also a bomb on the lawn to spice things up a bit. 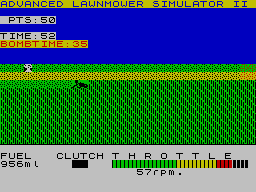 Your mower can also suffer fuel leaks, which ended all my attempts. And what’s really great is that without knowing anything about this game, ALS For (Some) Mobile Phones stole one feature from it… 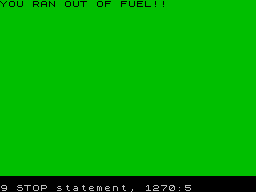 …crashing no matter what you do. Oh, and it’s a multiload.

Well, this one’s pretty big with the instructions. Pages and pages of the things, explaining how to give information about illustrative moving graphs and calculus and other stuff I don’t really understand. 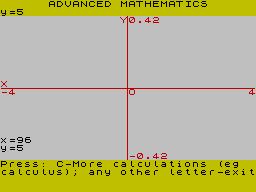 The instructions aren’t especially useful though, despite their length. I’ve been playing it for about fifteen minutes now, and I still don’t know what the aim of the game is. In fact, I’m starting to wonder if maybe it isn’t a game and in fact just some sort of advanced calculator system for helping kids with their homework. On the off-chance it isn’t though, I’m going to give it eight out of ten for longevity. There must be at least forty hours of gameplay in there. 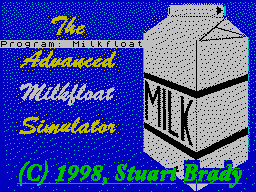 Oh no. The title suggests something awful, and the jaunty beeper tune doesn’t do me any favours either. Still, how bad can it be, eh? I mean, it’ll probably just be a crappy ALS knock-off – I can stand that for at least a couple of minutes, right?

I suspect this is just another computerised card game, a genre I really can’t stand. Thankfully, this game’s password-protected so I’ll never really know. 73 percent.

Any game that has the acronym this game does clearly didn’t have too much time spent on it. And it shows, what with this hideous screen greeting you on loading. 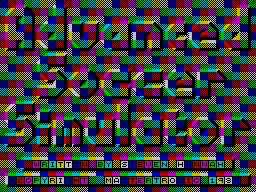 It’s animated in just the right way to leave you drooling face down on your keyboard. And what’s worse is that even if you manage to survive this, it turns out the game’s a football management game. Now, I enjoy a spreadsheet as much as the next man, so a screen like this… 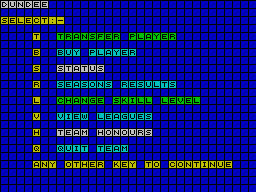 …naturally turns my blood to ice. Still, I’m not the sort to shirk his responsibilities (at least, not while people are watching) so I decided to actually play it. And here’s the proof: 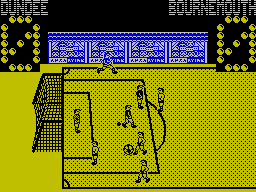 Apparently this is a ‘highlight’. Now, I’ve got to ask – when you’ve got a competent little footie game sitting there, waiting to be used, why oh why would you throw it away in favour of a table full of numbers? Why would you do that? Not just to me, the poor mug who’s got to play this stuff, but why would you do it to yourself? How can any programmer look themselves in the mirror, knowing that they junked a contender for Match Day’s throne in favour of a sequel to Advanced Mathematics?

This actually looks like a reasonable-enough little maze game. A little Rogue-like, in fact, only with an incredibly simple interface. You wander around the single-screen levels of a dungeon, looking for eight pieces of a something-or-other, dodging monsters and eating food. Overall it’s very well put together for what I was expecting to be a terrible BASIC effort. You can even redefine the keys! 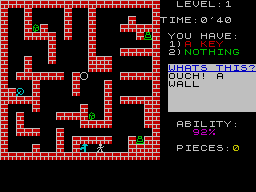 There are just a couple of things wrong with the game – first, walking a single tile in any direction costs you one health point. Walking into a wall costs you two health points. Wouldn’t it be nicer to just not penalise the player for holding down a key? Secondly, on my first go I died because there was a bomb in a treasure chest. (‘A shield would be handy’, says the game. Yeah. Thanks for that. A gun would be handy too – if you’re throwing bombs around, why can’t I shoot the monsters?) 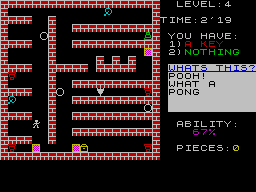 Still, there really is a fair bit to this game, and I intend to give it a little more attention once I’m done with this feature. I won’t be opening any more chests though. Tch. 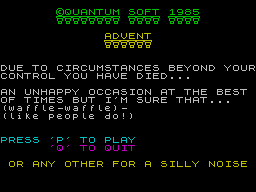 (It really does make a silly noise too.)

It’s the classic first text adventure game. It’s good, but not as good as, say, The Very Big Cave Adventure, which I’m deliberately going to bring up as a better game now because I’m not going to get to tell you about it otherwise for another fifty years. So, The Very Big Cave Adventure, by St Brides, is an absolutely brilliant parody of this game that transcends it in every way.

This game, on the other hand, is simply a good, solid example of how a text adventure should behave. Am I still meant to be marking these things? Er, seven out of ten.

As some of you are aware, YS3 is brought to you from the fair city of Bristol. (Bristol’s been a hotbed of Speccy-related activity, in fact – it turns out I spent some years living just round the corner from Alchemist Research with neither of us being even aware of the other’s existence. Tch, eh?) Anyway, it’s this fact alone that earns this text adventure more than the usual ten minutes. (I almost relented on being informed by the opening instructions that it’s a text adventure with a time limit, but hey – I read pretty fast. I just write slowly.) 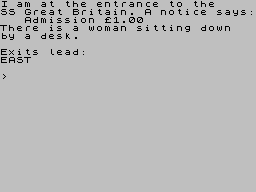 (Definitely 1985 – admission’s more than a tenner these days. Eeh, I remember when you could get a comic, some sweets and a drink out of a pound…)

It’s a game that ostensibly gives you a chunk of Bristol to wander around. Sadly that means leaving out any sort of description at all, and just telling you what road you’re on. The interface is also utterly hopeless. It takes about a quarter of a second to display each letter, so even the pitiful location descriptions take an age to appear. Typing in commands is even worse – you have to hold the keys down to get any response, and there’s no way to delete a letter once it’s in. 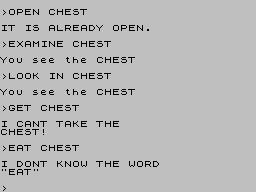 And for making me suffer a virtual Bristol even more bland and uninteresting than the real thing, there’s not enough points for me to take away from the final score.

Like a fool, I decided to view the instructions. The background story began scrolling up the screen at a glacial pace. It took over three minutes to finish while I was holding down RealSpec‘s Turbo Boost key. Then, in the spirit of fairness, I decided to play the game anyway, and was confronted with this: 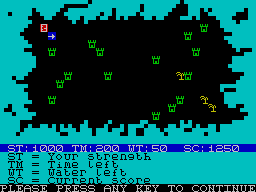 It’s like Advent, only without the graphics, or the charm, or the proper user interface, but with a good ten minutes of pointless, irrelevant background story. One out of ten, if only for giving me a chance to fight a giant enemy crab.

For example, what’s this? 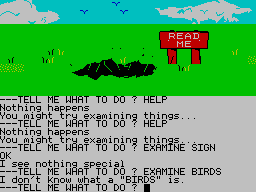 Well, it should be obvious what it is and how to interact with it. 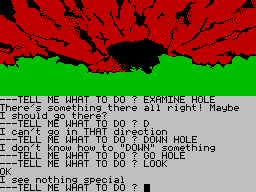 Look, I like text adventures, okay? This isn’t a text adventure. It’s some sort of freakish puzzle game involving text, but it’s not a text adventure, and I can’t be bothered to figure out how to interact with stuff I can’t really interact with. There’s only so many times you can see the words ‘nothing special’ before you start thinking that about the game.

Look, I know enough about adventures to know that Level 9 are legendary, but I loaded this up and, well, take a look for yourself. 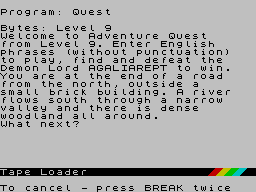 It takes one call to the ROM to clear the screen. That’s one line of code, even in assembly. One line, and they couldn’t be arsed. That’s not the work of a legend – that’s the work of somebody who doesn’t want the fifth ‘adventure’ of my day to get a proper score. On the other hand, it does have a proper location desciption, and also seems to be a remake of Classic Adventure (albeit not as good a remake as The Very Big Cave Adventure). I guess I can give it a couple of points then, but only because I want it out of the way so I can move that bit closer to a proper game.

Ugh, what a horrible selection. Still, hopefully things’ll pick up next time, as I lead you from Adventurer (hopefully not a text adventure…) to Aegean Voyage (or thereabouts).