Right, let’s get cracking, shall we? I’m sure there’s a whole bunch of excellent stuff to be had this time around, after all the weird stuff I’ve had to play through so far. And what a great title! It sounds like it’ll be some rip-roaring high adventure, with a fantastic sci-fi plot involving alien zombies on a space station or something… 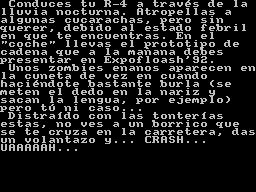 Ah. Well, there’s zombies at least. I think. Anyone know the Spanish for ‘space station’? 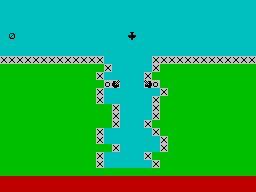 I don’t care what Infoseek says, this has got to be a Crap Games Compo entry. 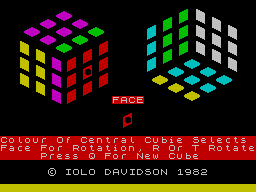 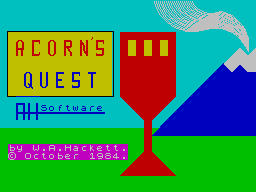 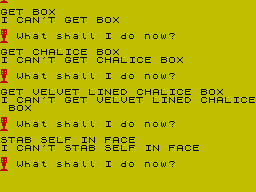 On the other hand, it is rubbish. 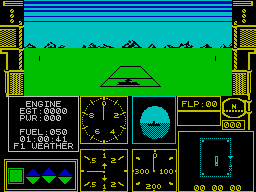 Oh no, it’s another flight sim!

You know what bothers me most about all these games? The crappy BASIC ‘adventures’ and shoot-’em-ups have pages and pages of background story and instructions, and the unfeasibly complicated simulators have nothing at all. Not even the most basic controls are hinted at. So while you’re hitting the keys at random to find out what the heck’s going on, you can get used to seeing this pretty often. 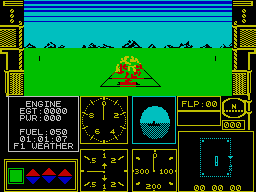 I’m sure if I ever got into the air, though, it’d be fantastic.

Across The Ravine – Granada Publishing, 1983 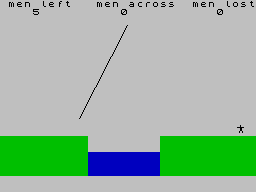 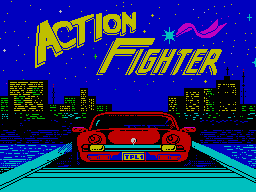 Well, that’s a nice loading screen. And some nice, bouncy music on the main menu. There’s even control options! It’s just like a real game… 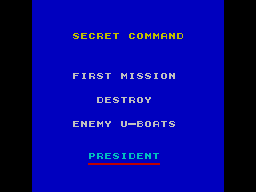 Wait, destroy U-boats?! No! Not another flight sim! What did I do to deserve…

Oh. Hang on. I’m on a motorbike. Bombing submarines is going to be a bit tricky from here, but at least I don’t have to figure out my flap settings. It’s a nice, straightforward vertically-scrolling shoot-’em-up – Spy Hunter on a bike. Every so often a van with ‘SEGA’ written on the top rolls by, and if you drive into the back, Knight Rider style, you get some weapon upgrades. 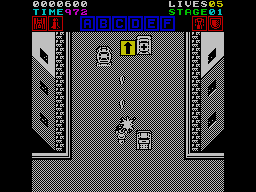 It’s all very fast and furious, and the controls and scrolling are as smooth as you could wish for. There’s even a little icon at the top of the play area telling you where the road’s going to go, Sega Rally style. Playing this game is such a relief after wading through all the other crap today, I’m giving it 10 out of 10.

I was never a fan of Action Force (or GI Joe, as they’re known these days) when I was a kid. They had some decent Transformers cross-overs, but generally they just didn’t grab my attention. Still, they were popular enough to get themselves a few videogames, not least this horizontally scrolling shoot-’em-up. You get to play a ninja flying (gah!) a James Bond-style mini-helicopter across a chunky, colourful landscape, dodging missiles and shooting big floating ‘S’s. 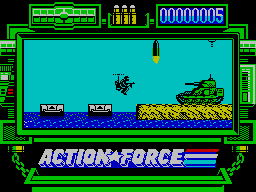 Bit of a let-down after Action Fighter, to be honest. The only moving objects on the screen are me and the missiles, and all-in-all it feels like a bit of waste of time dodging them and shooting or dodging the ‘S’s. Still, it looks nice enough, eh? This one gets a YO out of JOE! (Bonus points for the readers – what was James Bond’s helicopter thingy in Thunderball called?)

Here’s a strange one. Rather than using the same game with different levels, as most sequels tend to, this game is completely different from the first one. It’s an Op Wolf style game, with you controlling a floating crosshair with which to shoot a bunch of bad guys. The first thing you see is a guy with a gun wandering around. Shooting him loses you a life, because he’s the guy you’re supposed to be protecting from gunmen, sticks of dynamite and comedy weights. 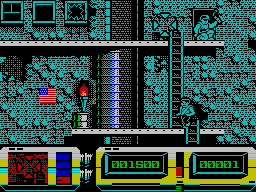 It’s a bit different, which is nice, and a lot more interesting than the game that came before it. It also doesn’t seem to be burdened with pointless cartoon nonsense, either. The only trouble, really, is that it seems to be one of those games where you have to memorise where the bad guys are going to appear and get your crosshair there ahead of time. And when the guy you’re protecting doesn’t have an energy bar at all, that makes things incredibly difficult. I’ll give it 7 out of 10, though, because it beats flying a helicopter.

That’s it for this instalment. Next time it’s Action Reflex to Adultia. (Cripes!)