It’s time to review some games. 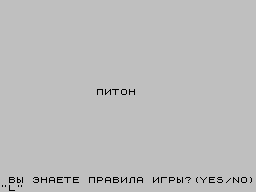 Another day, another new and incomprehensible language. Things did not improve after this screen. 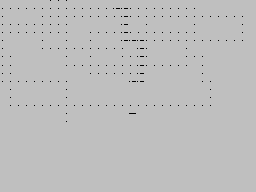 So, it might not look like it, but it’s actually a Snake clone. Those dots aren’t your snake though. Oh no, those little dashes are your snake. Apart from one of them, which is the next bit of food. Now, look at those graphics. When you die the game over message brings up ‘scroll?’. I think I’ve stumbled across a Russian CSSCGC entry.

Two out of Cascade.

Hurrah, an Imagine game! That’s encouraging. Their games were always great, after all. Apart from that Play For Your Life thing, but that’s another story. 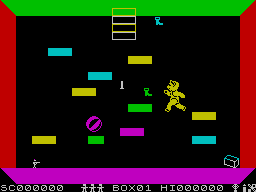 Look! Look at those big, chunky, colourful sprites! And they’re fast and everything! And I’m a teddy bear running around a room full of toys! And… oh. One of them killed me. That’s a bit unfair, isn’t it? Okay, so if I throw the ball at him it dies, and now this blob appears and… oh. I’m dead again.

A read of the instructions and ten minutes later I’m still stuck on the first screen. Teddy bear out of plastiscene. 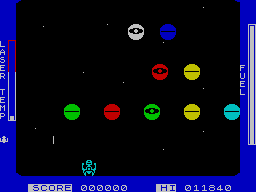 So, it’s some sort of shooter then.

It’s the sort of shooter where my first game is over in ten seconds while I try to figure out the controls. I wish I was kidding. Ten bleeding seconds. And to add insult to injury, I get this:

Naturally there’s an screamingly irritating amount of bleeping along with this ‘special’ ‘effect’, at just the right pitch to cut through even Girls Aloud and say, in the only way a computer could in the early eighties, ‘you suck, loser’.

Normally I’d have a second go, but this game’s managed to irritate me so much in just ten seconds of play that I’m just going to give it one out of ten and hit reset.

If there’s one thing today has taught me, it’s that there were no good games in the early eighties. Until Matthew Smith got around to writing Manic Miner it was all as exciting as Ahhh. The entire world was writing Crap Games Compo entries, getting in well ahead of the first 1996 deadline. They’d go to the trouble of learning assembly and writing routines for big, coloured sprites to fly around the screen smoother than Nicola Roberts’s… er, cheeks. And then they’d spend the rest of their time undermining all the good work they’d just done. 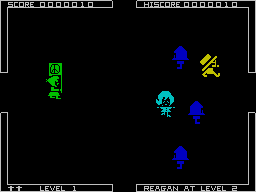 I mean, look at this. Big sprites, smooth and fast animation. And what are the keys? The keys that can’t be redefined? Shift and Z for left and right, X and C for up and down. You think they didn’t do that on purpose? Well, think again folks. There’s something in my theory, I’m sure of it.

I couldn’t get past mission selection. Tch.

Oh god, back to the early eighties CGC. Three pages of instructions are never a good sign. 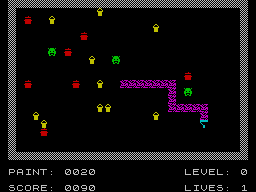 And oh look! It’s another Snake clone! Sort of. Only different. Anyway, it takes a full ten seconds to draw the screen (probably has something to do with all the goddamn beeping it does while it’s drawing), and then I die almost straight away because if I’m not holding a direction, the thing I’m controlling defaults to down. Yes.

This has got to be the lowest scoring selection of games so far, hasn’t it?

So I load the game up, and it asks me if I want a briefing. Then the briefing screen comes up, and it starts printing it character by character. Five slow, slow lines a page. And it’s beeping with every character it displays. Four pages in I gave up.

Oh, god, no. Can’t I have a late eighties game? Or even something from the nineties? Haven’t I earned that by now? I mean, just look at this loading screen: 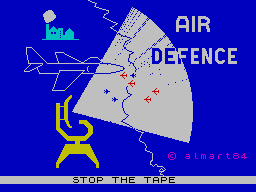 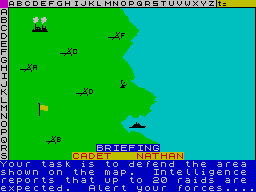 It’s some sort of strategy game, isn’t it? And it won’t have any cursors, I’m going to have to type in grid locations without the grid actually being visible, and without having any clue about what bizarre rules this game has, like having to manually land planes to refuel or something. I’m going to have to deal with an enemy that’s either horrifyingly efficient or horrifyingly stupid. And I’m almost out of Doritos too. Damn it…

So that’s it until the next batch of reviews. Next time it’s Airline to Airwolf 2, to the accompaniment of as many Pickled Onion Monster Munch as I can lay my hands on…